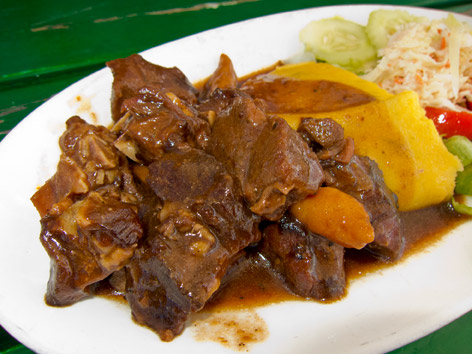 On the Caribbean island of Antigua, you hear the word “water” used to describe many a local dish—conch water, cockle (clam) water, goat water. But fear not: Watery broths these are not. Preparations vary, but chances are you’ll receive a very flavorful soup or even stew highlighting the featured ingredient. Goat water, a rich, hearty stew with notes of clove and cinnamon, was one of our favorites, especially this one, found in an unexpected place: a beach bar crawling with souvenir hawkers and day-tripping cruise shippers up from St. John’s, the Antiguan capital.

It was the type of place we might usually shun, but instead we went there twice—first at the behest of the Jamaican security guard we’d befriended at our apartment complex, and then because of Esther. Esther was the chef at the beach bar, and she promised us goat water—a traditional dish normally served on Saturdays only—on a Tuesday, because we’d asked nicely. Or maybe it was because I was pregnant, as Esther also promised to give us a good baby name if we returned the next day.

At the scheduled time, our goat water was ready and waiting. Esther served us, then offered up a name for our (as yet) unborn son: Isiah. “But you call him Siah,” she clarified. We dug in at the edge of the crowded beach, perched on a wooden picnic table across from a drunk girl with a missing flip-flop. No matter. The dish, studded with little dumplings and served with polenta-like fungee, was delicious.

Alas, “Siah” is still up for grabs. Don’t tell Esther.