For this dish spotlight, we turn to Moravia and its uber-seasonal burčák wine, which contributor Christopher Burdick recently had the pleasure of tracking down for us. 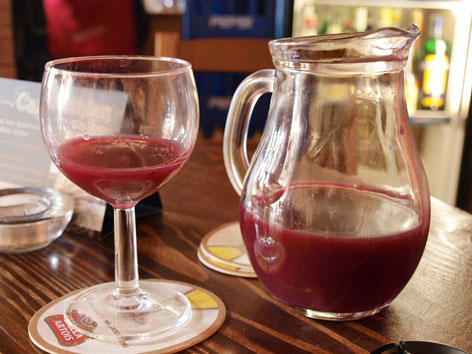 “It tastes like delicious, carbonated, innocent grape juice. But it’s far from innocent. Start drinking early and the next thing you know it’s 1am, you’ve had two liters, and suddenly it’s not so easy to stand up.”


I’ll admit it: I’m a sucker for booze that’s specific to a region. If someone tells me I can’t get it anywhere else, it’s down my throat faster than they can say “Prost!” Usually this sort of thing involves shots of strong liquor, like Serbian rakija or the infamous “green fairy” absinthe that burns like you just swallowed a flaming razor blade.

But recently I visited the town of Ostrava in the Moravian region of Czech Republic, and apparently at just the right time.

Moravia is well known for its wine, but for just a few weeks per year (usually mid-September into October), winemakers produce a special type of wine available in this region exclusively: burčák.

Pronounced “boorchack” with a rolled r, this wine is a local specialty that Moravians look forward to every year. Burčák is a young wine, meaning it’s only recently (and partially) fermented when sold—typically in unlabeled two-liter bottles at stands outside markets and in city squares—and it continues to ferment after you buy it. (That also means it tends to be relatively low in alcohol content, usually 3%-5% at time of purchase.) You’re advised to keep the lid partly unscrewed to let gases escape during storage so the bottle won’t explode while sitting on your kitchen counter. Good advice. 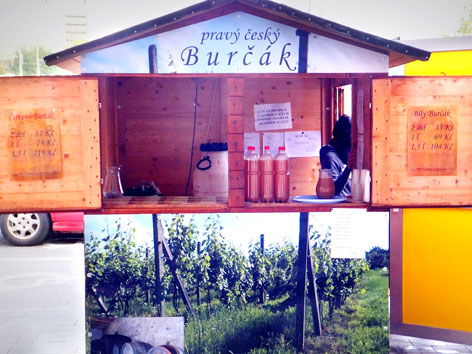 A burčák stand in Ostrava, Moravia. Photo by Christopher Burdick

You may be thinking, Why don’t I just store it for a while and make it stronger? Well, you could, but you wouldn’t want to: Keep it for more than a couple days and it starts to taste bitter. But don’t worry—you’ll have it finished by then anyway.

Most burčák you’ll find is white, but if you’re lucky you’ll stumble upon a red version. Get the red one if you have a choice; it’s far less common and, in my humble opinion, tastes much better. It’ll usually be a bit more expensive, but with prices already low, it’s a worthwhile upgrade.

When you drink a good specimen of this stuff, it tastes like, well, grape juice. Delicious, carbonated, innocent grape juice with a slight kick. But it’s far from innocent. It’s sold in large quantities and goes down easily. Very easily. Start drinking in the early evening and the next thing you know it’s 1am, you’ve had two liters of the stuff, and suddenly you realize standing up isn’t so easy anymore. 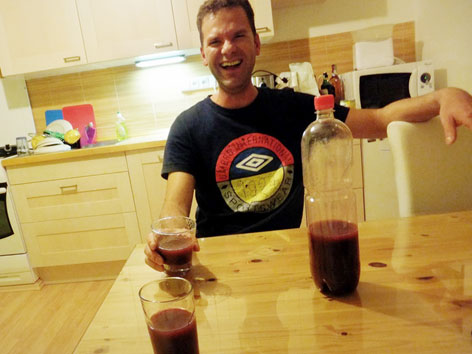 The author’s Couchsurfing host—and a fast-disappearing bottle of burčák. Photo by Christopher Burdick

If you visit Prague, you’ll see a growing number of places offering burčák. More often than not, I recommend avoiding these places. The wine will generally be of lower quality, watered down, or older than it should be. But if you must buy in the capital, be sure you’re going to a reputable place, not a tourist trap. Or go during vinobraní season (typically in September), when festivals celebrating the new wine harvest are held in some of the city’s parks, and good burčák (and other local and Moravian wines) is brought to Prague.

Remember, the younger, the better. Don’t buy burčák past its prime or after the season has ended (ask a local), as you’ll likely get a poor-tasting example. The best stuff still has plenty of grape pulp remaining, adding a unique texture to the drink.

Even though burčák wasn’t my usual esophagus-melting liquor experience, I can see why Moravians go crazy for it every year around this time. If you’re in Czech Republic in September or October, go find some! You won’t be disappointed.

About the author: Chris Burdick is a writer, a web developer, and a slightly obsessed (some would say mad) world traveler, having been backpacking nonstop since March 2012, stopping to work anywhere with wi-fi along the way. He chronicles far too infrequently on his personal blog, Travelsize Robot.